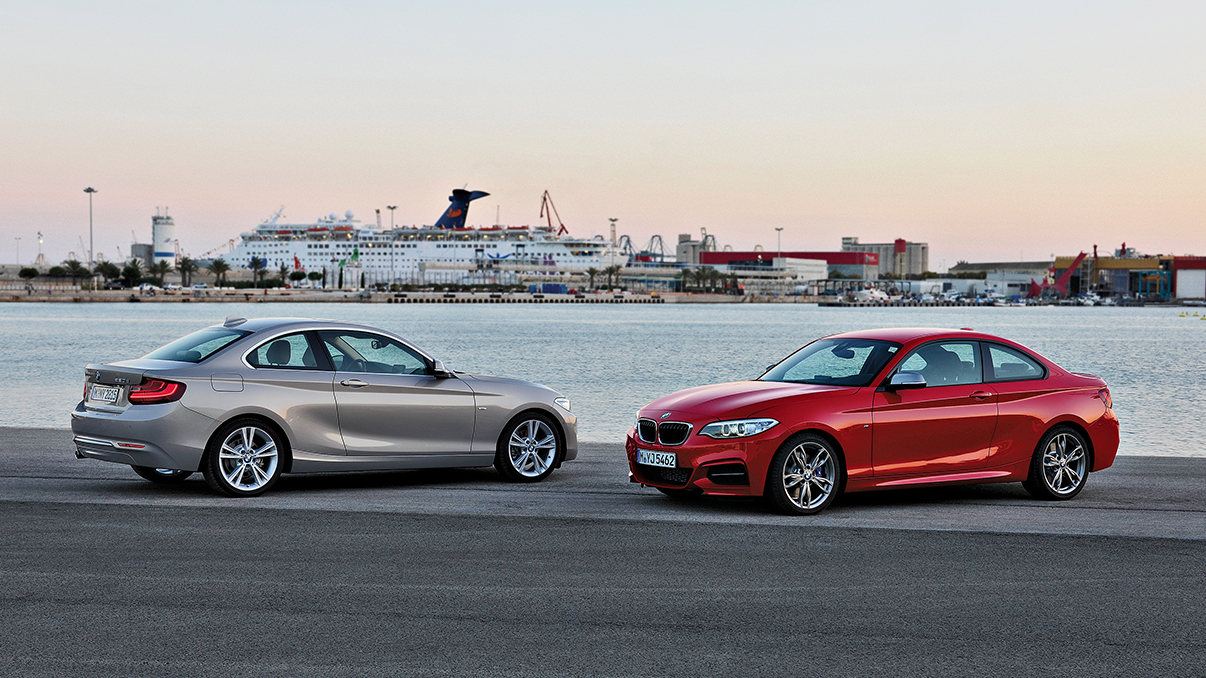 BMW’s 2014 2 Series was not the first time the auto maker treated the compact segment to its customary brand of driving pleasure. The BMW 1 Series, for example, had already fulfilled this role for nearly a decade. The model’s standout position among its rivals was rooted most prominently in its rear-wheel-drive concept, powerful engines with BMW TwinPower Turbo technology and compelling premium character. Similarly, the 2014 BMW 2 Series Coupe elevates the levels of driving pleasure experienced in a compact model. The two-door ride cuts a particularly impressive figure with its distinctive body design, a range of extremely powerful engines and specially configured chassis technology.

There is clear water between the BMW 2 Series Coupe and the BMW 1 Series, with the 2 Series model assuming a character all of its own. This differentiation is immediately recognisable in the car’s design, but it also makes its presence felt in terms of performance. The BMW 2 Series Coupe is an eye-catching creation. As well as a standalone appearance and increased dimensions, there is also greater depth to its product substance in terms of both technology and standard equipment. The result is an elevated dimension in driving dynamics, aesthetic appeal and premium allure in the compact segment, highlighted by the “2” in the car’s model designation. The number two has denoted the presence of a supremely sporting driving experience in a compact two-door car for over 45 years—ever since the introduction of the BMW 02 range.

Characteristic features of a BMW Coupe

The specific vehicle concept behind the BMW 2 Series Coupe—unique in its segment—is faithfully reflected in its body design. The two-door model is first and foremost a coupe from the BMW brand, and the design features that identify a member of this special breed—a three-box body with clearly defined boot and low-slung silhouette, a long bonnet, doors with frameless windows and a dynamically stretched roofline flowing smoothly into the rear end—are carried over into a compact model with greater enthusiasm and intent than ever. The ultra-sporty driving characteristics of the BMW 2 Series Coupe—generated by a hand-picked selection of engines and chassis technology tuned to make the perfect pairing—are thus unambiguously expressed in the design of the exterior. The 135 kW/184 hp four-cylinder engine in the BMW 220i Coupe is making its debut in a compact BMW model, and the 240 kW/326 hp six-cylinder in-line engine under the bonnet of the BMW M235i Coupe earns it top billing as the most powerful petrol-driven member of the BMW M Performance Automobile line-up.

Sporting tradition on a compact footprint.

The 2014 BMW 2 Series Coupe builds on the brand’s tradition of compact models offering a satisfying degree of driver engagement. And the presence of the 2 in the model designation creates a close link to this heritage. The introduction in 1966 of the BMW 1600-2, for instance, opened up a whole new vehicle segment. Inspired most profoundly by its precisely tailored package of powertrain and chassis technology, the two-door coupe became a global standard-bearer for sporty handling and intense driving pleasure in the compact car segment. Additional engine variants increased the appeal of the new model series. For example, the BMW 2002 presented in 1968 took centre stage—in terms of both popularity and its success in turning “Freude am Fahren” (Sheer Driving Pleasure) from a slogan into an experience for whole new target groups. The most spectacular variant was the 125 kW/170 hp BMW 2002 turbo—the first model from a European manufacturer to gain the services of a turbocharger.